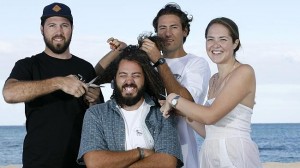 The Rottnest Channel Swim in WA is set to end its 25th event with a very close shave.

Cabe Paparone, at just 23 years old, has decided the February 2015 swim will be the day he loses his lovely locks that he has been growing for the last three years.

Cabe had originally decided to compete in the 2012 swim. However, when Cabe’s dad Claude was diagnosed with a rare form of lung cancer, he withdrew to help his dad instead.

Very sadly, Claude passed away aged 52 in September this year.

“On what will almost be three years to the day that dad was diagnosed, I will be swimming the 2015 Rottnest Swim in a team with three other mates and shaving my hair once we have completed the crossing,” said Cabe.

Once Cabe and his team of three other mates complete the 19.7km swim, he will have his head shaved on the beach.

“As soon as he got sick I decided to grow it,” Cabe said. “I was only going to grow it for a year, but thought no one would donate any money so I’d better keep on growing it.”

Cabe already has several eager volunteers putting their hands up to take part in the chop. Behind the clippers will be Cabe’s sister Romy, and brothers Marco and Jack.

Cabe told us his reason for supporting cancer research is because “we would like to contribute to research that assists people living with cancer to achieve the best care and treatment available.”

We’d like to extend our deepest sympathies to Cabe and his family for their loss, but also say a very big thank you taking on two amazing challenges in the New Year.

For more information you can see Cabe’s fundraising page here.