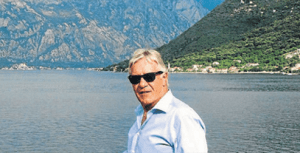 Ross’s son, John Birrell followed in his father’s footsteps as the Principal and Sales Consultant of the agency. He has pledged to donate 5% of the commission from each house sold in March to the Australian Cancer Research Foundation.

“I lived my life to make my father proud, and I like to think I achieved that. It was great to hear him say how proud he was of his kids, his wife, and his staff.

Ross, in a nutshell, was an action man. He was an utterly selfless and giving man with an enviable spark for life. He lived by the phrase ‘actions speak louder than words’ and I like to think I can carry on that legacy. As the anniversary of his passing approached we decided to support cancer research because we wanted to prevent other families from going through the same loss.

Ross tried his hand at every career under the sun before finding his true passion in real estate. Real estate resonated with his ambitious, enthusiastic and vibrant personality and with the help of his long-term mate, Tony Cant, he was able to set up two small businesses in Thornton and Medowie.

All of our offices are doing something to get involved. We’re currently advertising our promotion in local newspapers, have distributed flyers and made letterbox drops throughout the community. We have also shared it across our social platforms, our website and on our email signatures.

It was hard to say goodbye to my dad as he was my role model and my best mate.  I am proud that the team at Tony Cant can do our part to end cancer in his memory.” – ACRF Supporter, John Birrell

To learn about different ways your workplace can get involved with ACRF, click here. They recently established a new watch brand, Barbas & Zacári which caters to those with a passion for minimalist style and gives customers an opportunity to contribute to the fight against cancer with every purchase.

“To give back to a good cause and to do what we can to help, we decided to donate $5 (AUD) to the Australian Cancer Research Foundation for every watch sold.

We are extremely proud to be supporters of cancer research and we can’t thank our customers enough for their support thus far. We are really excited to see what we can do in 2016,” said the founders.

The brand promotes their watches alongside the hashtag #yourtimeisvaluable, to highlight the importance of cancer research and recognise that every hour we spend on this earth is valuable to each individual.

“We think it’s marvellous that designers and young entrepreneurs are doing what they can to help us fund research into the diagnosis, treatment and prevention of all types of cancers,” said ACRF’s CEO Professor Ian Brown.

Their first collection, released in December, offers five styles of contemporary and fashionable unisex watches that suit any occasion. For more information on Barbas & Zacári or to purchase one of these great time pieces, click here.