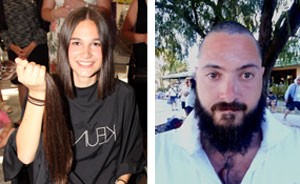 Over the past few months we’ve had some very brave supporters choose to lose their long locks in support and honour of loved ones.

Last year, Cristelle should have been happily celebrating her 26th birthday. Instead her family were rocked by the news that Cristelle’s mother had been diagnosed with breast and lung cancer.

Motivated by her mother’s strength and determination during her surgery and treatments, Cristelle grew her beautiful long hair even longer in order to cut it for charity in December.

Cristelle said, “I have been inspired to grow my hair to make a wig for someone who has lost their hair, just like my Mum did. She is such a strong woman, a fighter.”

On top of cutting and donating her hair, Cristelle also chose to fundraise for cancer research smashing her $2,500 target and raising a most generous $6,914!

Another recent head shave took place just after one of WA’s most famous swim events: the Rottnest Channel Swim.

Cabe Paparone and his three mates took on the challenging swim and, although they were met with some pretty rough conditions, managed to finish in seven hours and 41 minutes. What a fantastic effort!

Cabe’s (very excited) friends and family then took to the clippers to shave off that mane he had been growing for 3 years, in honour and memory of his father who sadly passed away in September.

Through a giant fundraising effort, which saw him organise fundraising events in the lead up to his swim, Cabe raised over $7,500 for cancer research! What a legend!

We’d like to thank Cristelle and Cabe for such an amazing effort. We are inspired and humbled by their dedication and generosity

If you are interested in fundraising for cancer research through shaving, cutting or colouring your hair please click here for more information.