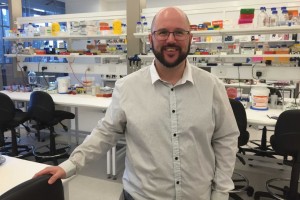 Melanoma is the third most commonly diagnosed cancer in Australia, and although there are effective treatment options available to those who detect it early, the five-year survival rate of patients with more advanced cases is only 10%.

“Each day around 30 Australians are diagnosed with melanoma, and from that more than 12 hundred a year lose their battle with the disease,” says Dr Law. “So each little piece of knowledge that we uncover is crucial as it affects the overall picture and helps us to continue to develop and improve the ways we detect and treat it.”

The study found five new regions of the genome associated with melanoma and formally confirmed two more that were suspected to be risk factors.

This research takes the total number of known melanoma gene risk regions to 20. “Most of the major gene risk regions previously identified are associated with pigmentation, or the number of moles a person has. The five new gene regions we’ve discovered are from different pathways, so it’s yet another piece to add to the melanoma puzzle.”

“Out of the new regions that were found, the most interesting biologically, was one involved with the maintenance, development and length of the telomeres. Telomeres are like shoelace caps at the end of each strand of DNA that protect our chromosomes from damage. We know that loss or damage to telomeres is a key factor in the development of cancer cells.”

Over 12 thousand melanoma samples were used for the project, making it the largest genome wide association study (GWAS) to identify variations associated with melanoma.

The international collaboration of researchers from QIMR and the Melanoma Genetics Consortium (GenoMEL) are now preparing for an even larger study which is expected to find more markers of risk.

“Our long term goal is to find drugs that modify the pathways that we’re identifying – that way we’ll be able to alter specific activity and bring it back to normal.”

“It’s very exciting to find something new about a serious condition – that’s the joy of doing this kind of research. Working in science is all about discovering new things that haven’t been seen or understood before and hopefully add a bit more knowledge to the world.”

The original article was published on the QIMR Berghofer Medical Research website.