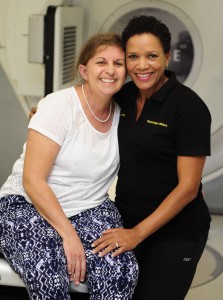 Earlier this year, Stephanie Barker was preparing to run the Mackay half marathon when she realised something wasn’t right. Just days after running 10km, she was flown to Townsville for treatment for an aggressive grade four brain tumour.

“I was totally unaware of what it was to have a tumour, or a mass, or brain cancer, I am so lucky the emergency room doctor was able to stabilise me in Mackay. Once stable, I was flown to the Townsville Hospital where I underwent major brain surgery.”

Before the surgery, Stephanie’s brain tumour was the size of an orange, which meant that she could only spend two weeks at home over Easter before heading back to Townsville to undergo six more weeks of daily radiation and chemotherapy.

It was there she met Elderene, a Senior Radiation Therapist and soon to be friend. “We were surprised to find that we have so much in common, we are both originally from Africa and had spent time living in England before getting married and making the move to sunny Queensland.”

The similarities didn’t end there – Stef and Elderene also share a passion for running. “I had been training for the Mackay run before being diagnosed but, unfortunately, doctors advised me not to run.”

“Being the character that I am, I started joking that Elderene should run in my place.” What Stef didn’t know at the time was that Elderene had actually completed 22 full marathons. “Unlike me she’s a veteran of distance – I’m in awe of her as I have to drag myself over the line in a half marathon.” Elderene assured her that 42.2km is nothing compared to having to battle a grade four brain tumour.”

A few days later, Elderene had some big news for Stef, “Elderene was bursting with excitement as she told me that she had been given a spot in the 2016 London Marathon, and that she would be running for me!”

“I am still stunned, so overwhelmed! Elderene had taken me so seriously that she is now going to travel 16,000km at her expense to run for me in the London Marathon.”

‘S.T.E.F’ became an inspiring acronym for the ‘Running for Stef’ Fundraising Campaign: Stop Tumours Ending Friendships. Elderene explained that raising money and awareness made her feel like she was playing her part.

“I want to see a cure for cancer in my lifetime and my aim is to raise $10,000 for the Australian Cancer Research Foundation for Stef and the thousands of people who are battling cancer.”