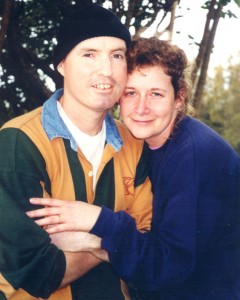 “Back in 1998 my husband and I were like any other typical family. We had two sons, one aged four and eight. My husband, Craig, was an electrical engineer and Officer in the Navy. He was passionate about the Navy and his job at HMAS Albatross in Nowra. Craig was looking forward to being promoted and taking the next step in his career, while I was studying adult education and both our boys were involved in many sporting activities. We were no different than any other family.

April 1998 will be a month I will never forget. Craig had been complaining of not feeling well, having a sore throat and just feeling lethargic. Within one week Craig had been admitted to the oncology section of Wollongong hospital and diagnosed with a rare form of Acute Myeloid Leukaemia. Our world tipped upside down in a moment and I was trying to explain to a four and eight year old that their father was very sick and may not live. Craig was told that the only way he could live was with a bone marrow transplant and that he didn’t have much time. The chances of survival were given at 30%.

Craig endured chemotherapy which was quickly followed by a bone marrow transplant. Fortunately for Craig his identical triplet sisters were a match and one was selected as his donor. Hurdle one was achieved. The next step was to get into Westmead Hospital for the transplant and that was hurdle two. The transplant unit only took 6 patients at a time and we had to wait. Unfortunately we didn’t have time to wait.

Eight months were spent in and out of hospital however after the transplant it was found that Craig had suffered a complication from the transplant which affected his lungs. After many years with Craig’s lung problems he eventually passed away on 8 August 2002 at 38 years of age.

Throughout all the treatments and hospital visits there was one thing that Craig was passionate about and that was raising funds to find a cure for leukaemia, particularly in children. Craig felt that if he found the treatments hard to cope with, then small children with any type of cancer would be in a worse position.

I continue Craig’s passion for finding a cure for all cancers, which is why I have become a Partner in the Cure. The researchers and medical professionals working at ACRF are equally passionate about finding cures in the hope that people like Craig get to live a fulfilling life with their families. I’m proud to do my small part by regularly donating to the ACRF so that they can continue to fund breakthroughs in cancer research.

Cures for cancer can only come from research and if we all contribute a small amount this means that cancer research can continue in Australia,” Regular Giver of the Month – Dianne King.