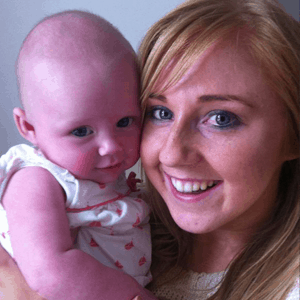 Honestly, I have never been interested in running a marathon but after the recent loss of two very special people, I wanted to do something to raise money for cancer research.

My god-daughter Jessica passed away at age four last year, after months of treatment for neuroblastoma. My Grandad Graham also died, and very suddenly, with lung cancer being a contributing factor. Both of them lived in the UK, which was my home before moving to Australia three years ago to take a job in the banking industry.

The impact of cancer is huge. I see how my friend Nicki struggles every day, having lost her daughter, and my own family was shattered by the death of my Grandad.

I cherish memories of Jessica and it’s sad to know that Aunty Sammie, as she called me, will never be able to build the relationship I really wanted to have with my only god-daughter.

My grandfather and I were very close and there are so many wonderful memories of times we spent together. He was a very patient man which was undoubtedly tested while teaching me how to drive a car, and he was an enthusiastic football fan, convincing me to support his favourite association club.

When thinking about the many options for fundraising, nothing stood out that would challenge me to push out of my comfort zone. At the same time, I also wanted to highlight the importance of on-going fundraising for cancer research. One of my work colleagues suggested running in a marathon – a suggestion that I entertained for about five minutes before dismissing it as too hard. It took me about a week to come to the conclusion that any pain that I would encounter in distance running would only be a shadow to what Jessica felt on a daily basis while trying to beat cancer.

I started off unable to run 5 km and now my longest distance has been 35 km. It’s thrilling to come so far in so little time.

I chose to support ACRF at the Blackmores running festival after learning that ACRF have a panel of medical advisors that ensure funding is provided to the most promising research initiatives. Those researchers need funding to work out the combined clues that will eventually end this disease.

I am probably a bit addicted to running now. It’s not just the mental and physical challenges, it also really shows how much you want to raise money to support this cause. Memories of Jessica and my Grandad will be with me every running step of the big race on 17 September.