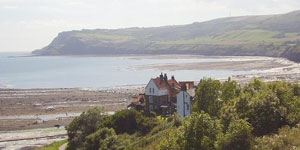 Olwen Bradford Cowling, long-term ACRF supporter, is about to complete an incredible adventure, taking on the Charity Challenge of walking more than 320km across the UK countryside for cancer research.

Along with the support of her sister and friends, Olwen has been traveling the Wainwright’s Coast to Coast path, beginning at St Bees on the West Coast, and finishing at Robin Hood’s Bay on the East Coast of England.

Now a five-time charity challenger for the ACRF, Olwen has made an incredible impact on cancer research funding in Australia. For this event alone, her team have raised more than $10,000 – bringing her total fundraising for the ACRF to $37,384. We’re blown away by her efforts and the generosity of her family and friends!

Olwen’s trek is in memory of her mum, whom she lost to cancer in 2005.

“I decided from then on, I would do what I could to support cancer research in the hope of one day finding a cure,” Olwen said.

And for this trek specifically: “I would like to make this [online fundraising] page a Tribute Page, not only to those who have lost their battle against cancer but also to celebrate those who have kicked cancer’s butt!!”

International Charity Challenges are a fantastic, unique way to show support for cancer research while testing your strength both emotionally and physically.

If Olwen’s story has inspired you, we have a number of International Charity Challenges occurring in 2015:

This 10 day adventure covers a classic section of the Great Wall in the Hebei Province including picturesque rural villages and camping in remote areas hosted by local families. Other highlights include visiting Tiananmen Square and the Forbidden City as well as a celebration dinner in Beijing at the end of the Challenge.

Take in the beauty of central Australia and the West MacDonnell Ranges as you cross one of the country’s most iconic trails. The 8 day trip includes 6 days trekking, 5 nights in exclusive semi-permanent campsite accommodation and 2 nights in Alice Springs.

Cycle along the length of dramatic Tiger Leaping Gorge, located in the Yunnan Province, and explore remote rural landscapes and villages of China. During the 12 day Challenge, you will also visit the ancient city Shaxi and discover World Heritage listed town Lijiang.

This once-in-a-lifetime adventure is our longest International Charity Challenge. During the trip you will experience the breathtaking views of Mt Everest and Nepal, climb Kala Pattar and visit Mt Everest base camp, take a step back in time at the Thyangboche Monastery and spend time sightseeing in Kathmandu.