James Robson does the hard-yards for cancer research 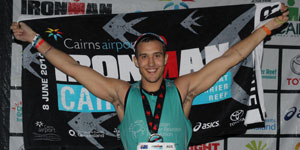 James’ motivation for completing these events is very close to his heart.

Just over three years’ ago, James’ father was diagnosed with a brain tumour while he was visiting his son in Sydney. Despite extensive treatment including two major surgeries, radiotherapy and chemotherapy, James’s father has been told he will shortly lose his battle.

“It is only a matter of weeks before dad passes away and I will be flying back to the UK when I get the phone call. He is the reason why I have tried to raise as much money as possible and help prevent the sadness which I feel,” James said.

In the hope of helping other people in a similar position, James has become an ongoing supporter of ACRF. Last month, he competed in the 2014 Cairns Ironman triathlon, which involved swimming 4.8km, cycling a massive 180km and running 42.2km. He completed the gruelling 226km course in 12 hours, 46 minutes and 32 seconds whilst battling heavy rain and blustery winds.

James has managed to raise over $12,800 for cancer research from this event alone. He also competed in last year’s Sydney Blackmore’s running festival, completing the marathon in 3 hours and 27 minutes and raising $11,120.

With amazing support from his girlfriend Kirsty and best friend Shaun, James has managed to make an incredible difference to our ability to fight cancer. Thank you, James, for your outstanding efforts in supporting the ACRF and cancer research in honour of your father.