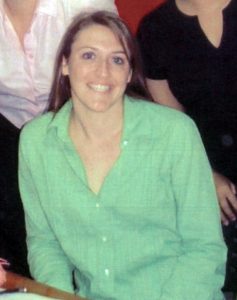 Georgie Nathan’s mission has been accomplished! Georgie has shaved her head to raise funds for cancer research, donating all the proceeds to the ACRF.

Georgie chose to have her long locks chopped in front of friends and work colleagues who had supported her quest. The Melbourne-based advertising manager said she was inspired to embark on her ambitious fundraising challenge after a close friend was diagnosed with cancer earlier this year.

“A couple of months ago my friend Danielle found out she was pregnant with her first child. Unfortunately what was supposed to be the happiest time of her life turned out to be the worst, when she was told that her pregnancy was a ‘Molar Pregnancy’ which in basic terms is an abnormal development of the placenta,” said Georgie.

“Part of her treatment involves chemotherapy, and she has since learned that the cancer has spread to her lungs.”

When Georgie found out about her friend’s plight she knew that she wanted to do something to help, but was unsure as to what.

“I could’ve simply made a donation to an appropriate cancer prevention organisation, however for me it was necessary to take a step further and do something that would affect me more personally. That’s why I chose to raise money by shaving my head for the cause.”

“Danielle is now into the third week of her treatment and whilst the outlook is positive, it is going to have a massive impact on her life.”