In full swing for the 2018 marathon 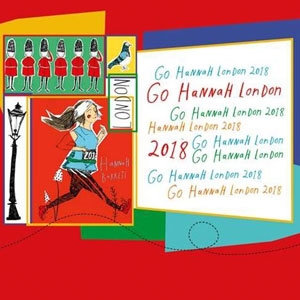 I’m Hannah, born in the UK, now an Australian citizen, and living near Canberra with my partner Trent and our rescue-shelter dog Odin. My current job brought me to Australia; I work as a Textile Conservator at the National Gallery of Australia in Canberra. Art conservation is quite a unique profession that requires skills which ordinarily don’t go hand-in-hand: art and science.

Running in the London Virgin Money Marathon has been on my bucket list for a while. In 2016 I ran the Canberra Times Fun Run for ACRF, and then became interested in other sporting and fitness events where ACRF needed fundraisers. I find that being part of a wider fundraising group gives a real sense of achievement and meeting fundraising goals becomes less daunting.

I have a personal reason for wanting to raise money for cancer research. My family and I lost our much-loved and long-time friend Barry to cancer this year. As a teenager and university student in the UK, I earned extra money for school expenses by working in a restaurant with my mother’s best friend Sally and her husband, Barry. I had the dream job of making desserts, and Barry and I had all kinds of funny conversations while working together in the kitchen. Like many teenagers I also went through a tough phase with my parents and was quite rebellious. Barry and Sally would always drop me off at home after work shifts; they became my surrogate parents during that time. I will never forget the love, support and kindness they showed me.

The indiscriminate nature of cancer is heartbreaking. Of all the people in the world, Barry and Sally have been two of the most emotionally generous people you could ever wish to meet. Having spent their lives imagining they would grow old together, they have been ripped apart. Although our family is heartbroken, Barry’s death has brought us closer together and we are more appreciative and caring of one another than before.

As someone who works in the science field, I am always interested in new scientific developments. I want to raise funds to enable continued research and scientific breakthroughs as well as help people improve their chances of survival and limit the side effects of cancer treatments. Although it could be some time before cancer is eradicated, tangible progress is happening now. I recently visited the ACRF funded John Curtain School of Medical Research where pioneering researchers such as Prof. Ross Hannan and his team are making solid advances in cancer medicine and treatments. This is where I wanted my fundraising dollars to go.

My London 2018 fundraising campaign has come with its share of doubts. Will I make my fundraising goal? Will I be able to run the entire distance? Will people be interested or care about what I am doing? So far, I have been thrilled by the response to my fundraising efforts from so many generous people. The ACRF team is also fantastic with their continued support and encouragement.

Running in the 2018 London Marathon will not be for Barry alone. It will also be for my friends and colleagues who no longer have mothers, fathers, brothers and sisters because of cancer. Those gaps can never be filled.