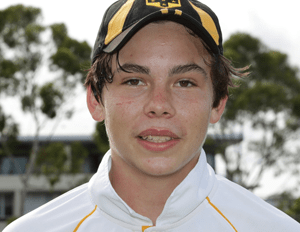 Sarcoma claims the lives of two in five people with this cancer. Hope lies in research, which will aim to significantly increase the prospects of survival for adolescents and young adults.

Eighteen-year-old Cooper, will leave the Sydney Grammar School gates for one final time on Friday 1 September 2017, but not as an HSC student with his life ahead of him, but instead, surrounded by many family and friends, who are left broken hearted at his passing. He lost a protracted battle with osteosarcoma on Thursday, 24 August 2017, in the arms of his loving family, and life will never be the same for those left devastated by his passing.

As were Cooper’s wishes, his family, Mitchell, Colin and Tania will continue the meaningful work of their son Cooper, through the Cooper Rice-Brading Foundation, for sarcoma research. Cooper identified the need for critical research for this cancer, very early in his treatment regime. He spent the past eighteen months passionately telling his story, in order to raise awareness and funding, so other adolescents did not have to suffer his plight.

In lieu of floral tributes, the family have asked if you may consider donating to the Australian Cancer Research Fund (ACRF), to facilitate the critical research required to prevent another adolescent needlessly losing their life to sarcoma.