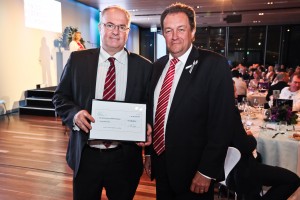 The Australian Cancer Research Foundation would like to congratulate James Service AM on his appointment as a Member of the Order of Australia.

Since their formation in 1987, the Canberra Cancerians have raised $4.02 million for ACRF through balls, gala dinners and other activities such as golf events. The Australian Cancer Research Foundation is very grateful for the efforts of this incredible group of volunteer fundraisers.

James Service has been an integral part of this committee’s success. During the 15 years that he served on the committee $1.77 million was contributed to cancer research and a further $1.97 million has been raised in the past 8 years that James has been Committee President.

This magnificent effort has been due to the leadership and commitment provided by James supported by his outstanding committee. ACRF would like to extend our thanks to James for his contribution and support to our Foundation and congratulate him on this very honourable achievement.