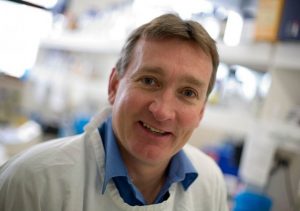 Earlier this year, venetoclax, which was developed at Walter and Eliza Hall Institute (WEHI), showed remarkable results in clinical trials for adults with chronic lymphocytic leukaemia (CLL). Most patients with an advanced form of CLL achieved either a partial or complete response.

Venetoclax targets the cell-survival protein BCL-2. In this collaborative study, researchers at WEHI built on their many years’ of research into drugs like venetoclax and their mechanism of action. Testing on children’s cancers was done at CCI in Sydney.

While leukaemia is the most common childhood cancer and has survival rates of around 90%, some leukaemia subtypes have much lower survival rates. Although treatment with venetoclax alone was not as effective in children’s cancers as in adult CCL, venetoclax was effective against pediatric acute lymphoblastic leukemia (ALL) in combination with other treatments.

Venetoclax alone was shown to be effective in mixed lineage leukemia-rearranged ALL (MLLr-ALL), which is a sub-group with a particularly poor prognosis. With further testing, the drug could be used for targeted treatment for children and infants with these hardest-to-treat leukaemia sub-types as part of a personalised medicine approach. Data from the published study will be used to support a future clinical trial.

Professor Richard Lock, Head of Leukaemia Biology at Children’s Cancer Institute, said that although it is disappointing that venetoclax is not looking as broadly active for the most common paediatric leukaemia, ALL, the research identified paediatric ALL sub-types that could be more susceptible to the drug than others.

Professor Lock said venetoclax is likely to be most effective when used in combinations with other drugs and that further research is needed to determine which combinations work best.

This news post was originally published on the CCI website. Image of Professor Lock courtesy of CCI.