Thank you Australia for getting behind Blue Friday! 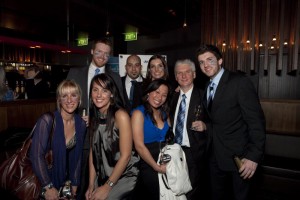 From local schools, to sporting icons, and workplace champions, we thank all our supporters who unleashed their creativity for all things BLUE to support men facing up to cancer on BLUE FRIDAY.

Armed with blue paint and flyers, representatives from our corporate supporters, PepsiCo Australia & New Zealand and Ernst & Young, volunteered their time on Blue Friday to spread the word on the street. An amazing effort, for which we thank them very much

Blue Friday celebrations were also a highlight over the Father’s Day weekend at Officeworks – with team members across Australia busy hosting a variety of activities for children, including blue face painting, in return for a gold coin. Local shop owners also rallied behind the cause, proudly displaying Blue September flyers and raising awareness of cancers in men among patrons.

Marie Claire magazine lent a hand to women and the men in their lives, by suggesting four ways to encourage men to think about their cancer risks and to get checked out by a health professional for cancer symptoms.

School children were in full spirits on Blue Friday – showing their support by draping themselves in blue streamers, clothing, and sporting a little blue paint.

And for those soccer enthusiasts, corporate sponsor Hyundai showed immense support by contributing $1,000 for every goal scored, at every match, during week 5 of the Hyundai A-League over the Father’s Day weekend.

What a fantastic start to a tremendous campaign throughout September. Blue Friday ended a whirlwind first week for the campaign – which kicked off with the Official Launch Party on September 1st in Melbourne.

The first week of Blue September has been a great success, but there’s still plenty of time throughout this whole month to show your support for raising awareness of cancers in men.

For more great ideas on how you can get blue this month see the Blue September Fundraising website.