Thirroul tattoo artist Wayne Cartwright had long been keen to do something for charity, and after going over his own experiences with cancer he came up with a unique way to raise money for cancer research. 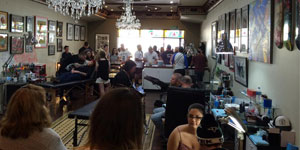 His unconventional cancer fundraising event, Tattoo for Cancer, was held last Sunday at Soul Expression with Wayne and four fellow skin artists donating their time to ink courageous volunteers with a cancer inspired tattoo. Together, they raised an incredible $10,000 for the ACRF.

Wayne, the owner of Soul Expression, said interest leading up to the event had been immense with many people eager to get a permanent ode to their cancer experience.

“It’s a very emotional subject for a lot of people. I’ve done plenty of similar tattoos in the past and they always have so much meaning.” Wayne said.

“It could be someone who has been touched by cancer or a survivor and they get the tattoo to remind them of their journey; it’s often their first tattoo and the most important.”

The local community rallied behind the event with a local butcher donating 800 sausages for the day and, along with the skin artists working hard to get through as many tattoos as they could, many retailers donated prizes for the silent auction and raffle.

Wayne reassured all those that missed out not to worry as the massive turnout meant that hopefully they can do it again next year on an even bigger scale!

A huge thank you and congratulations to Wayne and everyone who contributed to the day! We’re so very grateful for your efforts and support.[/vc_column_text][/vc_column][/vc_row]