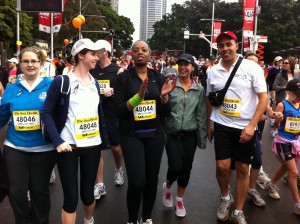 In August the Sydney CBD was overrun by 85,000 people and filled with a fantastic atmosphere for the annual City2Surf. Over 400 of the competitors were proudly supporting cancer research.

A group of ACRF staff were even out in force for the day taking on the 14km course. Many of our supporters were running for cancer research in honour of those who were fighting cancer and those who had sadly lost their battle with this disease.

Our top fundraising team, Ann’s Angels, were doing just that. Dave and his team were running for his terminally ill mother Ann. Dave said “It’s easy to sit around and mope, but while she’s alive I’d rather be positive.”, and their team of over 30 people raised more than $18,000!

Big thanks and congrats to each and every one of our supporters for taking on the race – altogether contributing more than $70,000 to cancer research!