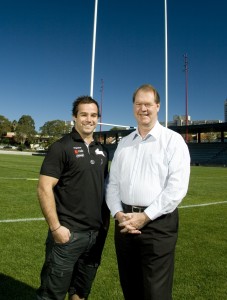 Cancer research ambassador and South Sydney Rabbitohs’ star Jamie Simpson recently added yet another honour to his impressive career, being selected for the NSW Residents team, who played against the Queensland Residents in the curtain-raiser to Game 3 of this year’s State of Origin series.

Jamie scored the equalising try to bring NSW back into the game, which they went on to win 28-20. The victory provided some comfort to the thousands of Blues fans disappointed by the Maroons fifth straight Origin series victory.

The NSW Residents team boasts some of the best young rugby league players in the country and represents a significant honour for emerging players. Many past NSW Residents’ players have gone on to play at the highest levels, a feat Jamie is not far from achieving. Despite originally hailing from Rockhampton in Queensland, Jamie is very excited to represent NSW and test himself against some of Queensland’s best. “I’ve worked hard to get to this point and am really looking forward to the opportunity. It’s a great honour.”

Jamie was named an Ambassador for the Foundation in May this year and is proof that the battle against cancer can be fought – and won. Diagnosed with Hodgkins Lymphoma at age 15, Jamie underwent extensive chemotherapy before beating the disease and fulfilling his dream of playing in the NRL. Apart from his role as an ACRF Ambassador, Jamie is very active in education and youth programs run through Souths Cares, the community engagement organisation run through the South Sydney rugby league club.

The cancer research team congratulates Jamie on his selection and stellar performance in the match, and looks forward to the Rabbitohs achieving big things in this year’s finals.

Read more about Jamie Simpson and his support of cancer research.