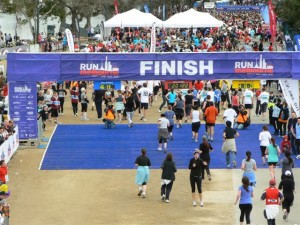 Over 20,000 people turned out in Melbourne on Sunday July 17th to take part in one of the biggest ‘Run Melbourne’ events ever. It was a grey morning, but that didn’t dampen the spirits of the 128 ACRF supporters taking part in the day’s events.

Amongst the ACRF team, there were some first time competitors and some seasoned racers ranging from 15 to 77 years of age. Each one of them chose to fundraise for cancer research in an effort to support a worthy cause in the knowledge that every dollar of their contribution will help make a difference in the fight against cancer.

There were a number of personal bests made on the day with many of our supporters being thrilled with their results in the race. Some have even been inspired to take on the Melbourne Marathon later in the year thanks to their great Run Melbourne experience!

The real winner of the entire event was cancer research with our most successful fundraising total to date. Over $34,500 was raised! And the incredible part of it was this fantastic fundraising total was achieved with half the participants we had last year! Way to go fantastic supporters! So many of our fundraisers were absolutely overwhelmed by the generosity of their family, friends and colleagues in sponsoring them for the event.

Congratulations to Adam Nicholson, for being one of the top individual fundraisers! And special thanks to our celebrity ambassador, Karen Martini, for being part of the ACRF team.