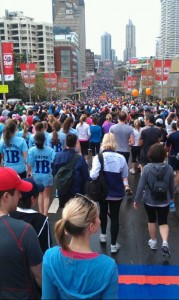 As summer begins the Australian 2011 fun run and marathon season draws to a close. The team here at ACRF are always astounded by how many fantastic supporters get out and get active for cancer research throughout the year. This year has been our most successful year yet with over $179,000 raised through the major running events across the country!

Each event has introduced us to some incredible supporters, each with their own story about why they chose to take on their running challenge while concurrently contributing to cancer research. Here are some of the highlights…

Early February started off the year with Sydney’s northern beaches hosting two widely attended events. The Cole Classic, now in its 28th year, and the brand new fun run, the Sun Run, making its debut. Thousands of people turned out across the two days to compete in these events, and among them were 13 ACRF supporters. Find out more about these races.

Our nation’s capital got active on April 9th for the inaugural Australian Running Festival. Seven ACRF supporters got involved in this community event with 5km, 10km, half, full and ultra marathon events. Check out more from the Canberra Marathon.

Bright and early on May 15th, 34 fantastic cancer research supporters took to the streets of Sydney as part of the Sydney Morning Herald Half Marathon. Read the full story of the SMH Half Marathon.

The Gold Coast Airport Marathon events got the crowds out in July, and with 6 events over 2 days there was something for all ages and fitness levels! Amongst the thousands were 6 ACRF supporters competing in various events over the weekend. Read more about the team.

Over 20,000 people turned out in Melbourne on Sunday July 17th to take part in one of the biggest ‘Run Melbourne’ events ever. It was a grey morning, but that didn’t dampen the spirits of the 128 ACRF supporters taking part in the day’s events. Read the full story.

In August the Sydney CBD was overrun by 85,000 people and filled with a fantastic atmosphere for the annual City2Surf. Over 400 of the competitors were proudly supporting cancer research. A group of ACRF staff were even out in force for the day taking on the 14km course. Check out more about Team City2Surf.

Later in August, Perth had their City to Surf with a record numbers of competitors taking on the challenge, and 15 of them chose to support ACRF. The weather was kind to the runners, producing a great day to be out running around the Swan River, with some taking motivation from those suffering through cancer to keep them running. Read the full story.

Brisbane’s big fun run event took place in September with over 40,000 people competing as part of Bridge to Brisbane. Our 48 ACRF supporters took on the challenge to great results and having a fantastic time as part of the day. Find out more about the awesome team from Bridge to Brisbane.

The City Bay Fun Run in Adelaide produced our smallest marathon team, with just 6 competitors supporting cancer research. They took on the race with great enthusiasm despite some injuries and some personal challenges to run the whole course! Read more about the City Bay Fun Run.

In early October, the crowds flocked to Melbourne for the Bank of Melbourne Marathon Festival. The ACRF eight person contingent took part in different races amongst the four distances on offer. Check out the full story.

Back in Sydney in early November, the heat made for a tough race in the Run4Fun at Sydney Olympic Park. Despite challenging conditions, our 18 supporters made it through in flying colours. Read more about the Run4Fun.

Rounding out the running events for the year was the inaugural City2Sea in Melbourne, the sister event to the Sydney City2Surf. A great team of 25 people turned out to support cancer research as part of their race challenge. Read the full story.

All these running events and many more will be back in 2012. We would love you to be on our team! Check out our sporting events page for more information about how you can  get involved in 2012!