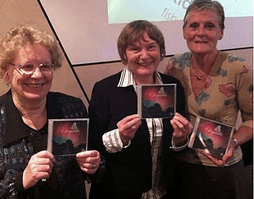 “It was 2007 and I was enjoying retirement after 30 years in nursing. But I had been experiencing stomach pain and weight loss for a few months. I’d ignored my friend’s continued pleas to see a doctor. Even though I knew there was a problem, I was in denial.

I finally had a gastroscopy procedure which confirmed I had stomach cancer. The first words that came out of my mouth were ‘How long have I got?’ and I remember feeling calm. My husband Jeff and I immediately broke the news to our children, both of whom were living overseas. Without delay, they flew home to be by my side and also support their father.

Over the next few weeks, I went through many different tests. A biopsy from my stomach showed it was a “rare lymphoid tissue lymphoma” and could be treated by antibiotics and chemotherapy. Unfortunately, a few weeks later another gastroscopy revealed the cancer was unaffected by antibiotics and it had spread through my stomach and developed into a high-grade lymphoma. The next move was a CAT scan to map out my stomach. I had to be given four minuscule tattoos as reference markers for my radiation treatment and I couldn’t wait to tell my son-in-law, who has a large tattoo on his arm, that now I had tattoos too!

It was humour that often helped me get through each day. It was a frightening time but I was so hell-bent on fighting for my survival. It’s amazing how the body and mind can cope through such a nightmare.

In early March, I started four weeks of daily radiation treatments. The treatments were successful and I was in remission until late June when I found a lump on the left side of my neck. A biopsy confirmed it was an aggressive type of cancer known as ‘diffuse large B-cell lymphoma.’ Surgery could only remove part of the node as it had adhered to my jugular vein so I began chemotherapy in August to help treat it. It was a particularly daunting time. I was nauseous, lost my sense of smell and taste and developed blisters in my mouth. I also became very forgetful, especially pots cooking on the stove. The loss of body hair made me feel very self-conscious. Thank goodness for wigs!

To deal with the side effects of my cancer treatment, I started composing music and lyrics. I never thought in my wildest dream, I would compose the story of my cancer experiences through music. It became the best medicine for me, taking me to another world where I could disassociate my cancer pain and any other discomforts from my various treatments.

After two months, the chemo treatment was finally over and I was back in remission in October 2008. I continued for another month on fortnightly MabThera IV treatment to kill off any stray cancer cells that might have been floating around my body. In March 2009 I had the best 60th birthday gift given to me, which was an offer to have my stem cells collected and stored for future use. but I hope I never have to use them!

The chemotherapy did affect my immune system badly and in 2010 I was placed on monthly IV Intragam Therapy to help rebuild it. Finally, the good news came in 2011. The oncologist informed me that I was cured, but there was a caveat – cancer may come back in about ten years. My reply was, “I’m not going to worry about the future as new and better treatments will be found.”

After experiencing cancer myself and losing friends who were not so lucky, I wanted to support cancer research. I know that researchers are working on new and improved treatments that will one day make our fear of cancer a thing of the past. After looking at various Australian cancer organisations I came across ACRF and was very impressed with how it functioned. Donations go towards grants that buy state-of-the-art diagnostic equipment for the best cancer researcher projects around the country.

I have raised money for ACRF in many different ways over the years. I’ve sold my handmade chocolates, jams and musical pattern placemats and serviettes. I’ve also hosted morning teas and organised garage sales with my husband and a few friends. One of my favourite fundraising activities so far has been creating my album ‘Chrysalis’, a musical storybook of cancer experiences. Proceeds from the sale of this CD go towards ACRF. I wanted to make a touching and uplifting album written from the heart to help others who are going through similar experiences. I want to support others who need to talk about their feelings and frustrations when going through cancer. Anyone interested is welcome to visit my website and interact with me. Hopefully, they will realise they are not alone.” – ACRF supporter, Rosie Lee