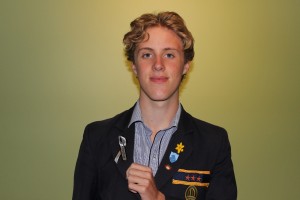 Riley Debney is working his way through year 11 and enjoying his hobbies – footy, basketball and photography. He also spends a great deal of time contributing to his community and helping others, which has included time volunteering in a Cambodian orphanage and now he’ll be raising funds for cancer research.

Riley first contacted the Australian Cancer Research Foundation to donate his prize money to cancer research after he became an ADF Long Tan Youth Leadership and Teamwork award winner through his school. Riley continued to build on his fundraising ideas and he’s well on his way to reaching the impressive fundraising target he set for himself. When he achieves it, he and a friend have pledged to shave their heads.

“Cancer had never really affected me until about four months ago when a relative was diagnosed with pancreatic cancer. That’s when I really started to think about how many other people in my community must be going through the same thing.

Then a young boy from my school, Rafael, sadly lost his battle a few days before Christmas. He was diagnosed with neuroblastoma when he was just four years old. His passing really encouraged me to bring my fundraising goals to life.

Our school and community had been following Rafael’s cancer journey for the past couple of years. His parents set up a Facebook account called ‘Rafael’s Warriors’ that gave us news on his progress and helped us keep connected with Rafael when he was away receiving treatment.

He truly inspired me to help out and contribute more to my community. His strength taught us all so many lessons of love, happiness and support – and that’s something I will take with me everywhere I go so that his legacy lives on.”

Riley believes it’s important to support cancer research because of the benefits that it provides to those who are affected by cancer. “It’s amazing to me that each dollar does so much to help end cancer and help save lives,” he said.

“I have got some great support behind me from my friends and family, as well as some sporting clubs that have come onboard to help me fundraise and some generous local businesses that have made donations. I’ve also been selling ribbons to help raise awareness about the importance of cancer research.

My advice to others thinking about supporting cancer research is to just go for it – there’s nothing to lose! At first, I was nervous about starting this fundraiser as I didn’t really know where to start, but this is a cause that I really believe in and I have already gained so much support from my friends and family. Within just a few friendly emails between myself and the team at ACRF, my idea had come to life and I was on my feet. Use your resources and you’ll be surprised what you too can achieve.”