Ride On! Cycling around the world for cancer

It’s been five years in the planning, and now

Rebecca Uleman and Milo Koper are finally ready to embark on an inspiring two-year cycling tour across the globe – raising money for cancer research along the way.

The Australian and Dutch couple will take off in May 2010 from The Netherlands, and cycle across Western Europe, through South-East Asia before eventually arriving in Australia and New Zealand in early 2012. An adventure dubbed by the couple “2 bikers, 1 world”, this is set to be an epic journey covering over 33,000km!

Besides having a passion for cycling, Rebecca and Milo are both personally motivated to raise money for cancer research – having close family affected by the disease. Rebecca’s father, John Uleman, was a Dutch national who immigrated to Australia after WW2. He passed away on 13 August 2008 from cancer of the oesophagus, only one year after remission from lung cancer.

“My father had a good life and passed away at the age of 82. Unlike many others, he lived what we would consider until a ripe old age,” says Rebecca.

At the age of 39 and with four young children, Milo’s sister is now fighting bone cancer. Just before Christmas 2007 she was diagnosed with an aggressive form of breast cancer, only to discover she has bone cancer after numerous operations and treatments. 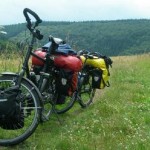 “‘We hope by doing this action we can contribute towards cancer research and hopefully a cure can eventually be found which will save so many lives,” say Rebecca and Milo.

This determined couple will self-fund the entire trip, as they want to see 100 per cent of the donations go toward cancer research.

“To give ‘Cycling for Cancer’ a kick start and to inspire others to give a little, we have made ourselves an initial donation of 500 euros!” say Rebecca and Milo.

The couple want to save lives, and are donating funds raised from their journey to the Australian Cancer Research Foundation. To support them please visit our Online Donations page and follow the links.

Thank you Rebecca and Milo for your huge generosity and best of luck with the trip!