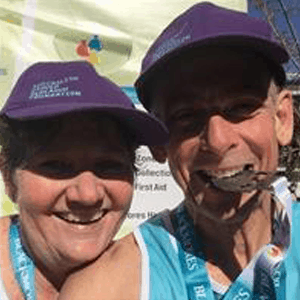 Two Queensland jewellers have completed the Sydney Running Festival in an effort to raise money for the Australian Cancer Research Foundation (ACRF) and pay tribute to a sales representative who passed away earlier this year.

House of Harvey jewellery store owners, Alannah and Bob Harvey, participated in the running event on Sunday 17 September and have so far raised $2,750 for ACRF in 2017.

The Ingham-based retailer has supported the cancer research foundation for many years; however, Alannah said the 2017 fundraising efforts were in honour of Mike Griese, a sales rep for Ikecho Pearls, Jewellery Centre, Imajpack and AM Imports who lost his battle with cancer in March.

“We have always supported cancer research; having lost family, and with a team member’s survival from cervical cancer, it is the best ‘fit’ for our store,” Alannah explained.

“After Mike Griese lost his battle, we felt compelled in 2017 to honour him, another life cut too short,” she added.

Alannah said the Sydney Running Festival was an ideal way to generate industry support for the retailer’s charity efforts and increase customer relationships.

“It’s a high-profile event with many spectators and national media coverage, and therefore is a great platform for ACRF to create awareness, recruit participants for vital funding for cancer research and showcase achievements,” she explained.

“It also gives us a fundraising platform for our clients – who support us each and every year – to regularly see just how a little effort can achieve great results.”

Alannah said her store’s ACRF fundraising initiatives would continue through to Christmas, noting that several suppliers including the Jewellery Centre and Adina Watches had also supported the business’ efforts.

She stated that there were additional industry benefits to promoting charitable causes.

“We believe today perhaps more than ever, the public seeks businesses that have a social conscience,” Alannah explained.

“The opportunities are there for all of us in retail to contribute to society by simply being a little creative every time we run a promotion, and it is our philosophy that most of the public appreciate that a business is constantly working to assist ‘something’; they feel apart of it, and they get a bonus in return.”

ACRF was established in 1984 and aims to end cancer by providing scientists with the equipment required to improve prevention, diagnosis and treatment.

Founded in 2001, the Sydney Running Festival is conducted by non-profit organisation Athletics Australia.

The event supports numerous national-based charities and has raised more than $16.9 million since its inception.