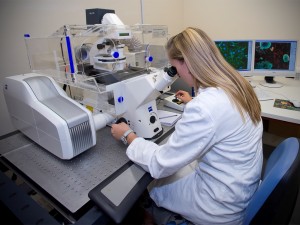 Researchers at the Walter and Eliza Hall Institute (WEHI) have found a new anti-cancer agent called ABT-737 that targets and neutralises Bcl-2 “pro-survival” proteins in cancer cells.

The project was undertaken at WEHI’s world-class cancer centre, which has received significant ACRF funding over the last five years.

This funding allowed researchers to better study the characteristics of proteins from the Bcl-2 family which are found at high levels in up to 70% of breast cancers – including typically aggressive ‘triple negative’ breast cancers – and work to prevent cell death, even in cells that have been damaged by chemotherapy.

In an exciting breakthrough, Professor Lindeman and the WEHI team working in the institute’s Stem Cells and Cancer Division have since found that breast tumours with high levels of Bcl-2 respond well to treatment when conventional chemotherapy is used in conjunction with the ABT-737 agent.

“We have had a good result in pre-clinical models of disease, but we are still a way off this being used in humans.”

Professor Lindeman indicated this excellent research could lead to the development of new treatment regimens for breast cancers which are otherwise difficult to treat, within the next few years.