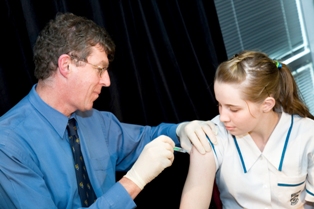 2006 Australian of the Year Professor Ian Frazer will be Chairman of the Australian Cancer Research Foundation’s (ACRF) Medical Research Advisory Committee (MRAC) from 2009. The announcement caps off an outstanding year for Professor Frazer, who with his late research partner Dr Jian Zhou, contributed to the development of a vaccine for cervical cancer.

In October, Frazer won the nation’s pre-eminent award for excellence in science – the 2008 Prime Minister’s Prize for Science – which acknowledges the contributions of Australian scientists to economic and social wellbeing in Australia and the world. He donated the $300,000 he won in the Prime Minister’s Prize to the University of QLD for a research program to develop further vaccines. In September he took out the Balzan Prize, a major international award recognising his lasting contribution to preventive medicine. Since the vaccine’s global application in 2006, more than 40 million doses have been administered to women and girls in more than 90 countries.

Commenting on his new role, Professor Frazer said that “The ACRF does good things for cancer research; they are in it for the long haul and only major research initiatives with a high chance of success, qualify for their critical infrastructure funding.”

Professor Frazer has served on the ACRF’s Medical Research Advisory Committee since 2005, and is currently a Director of the Diamantina Institute for Cancer, Immunology and Metabolic Medicine at the University of Queensland.

Professor Frazer’s research partner Dr Jian Zhou’s pivotal role in co-developing the cervical cancer vaccine was formally recognised in a commemorative service at State Parliament House in Brisbane in October this year. Jian Zhou died in 1999, aged 42, but not before the science of the vaccine was effectively complete.

David Brettell, Chief Executive of ACRF said that “the Foundation’s vision is one of a world where our brilliant research scientists can achieve things tomorrow that they can only dream of today, to eradicate cancer and its effects on people. He added that ‘for every major research initiative we fund, there are at least another three or four worthy of receiving an ACRF grant who miss out.”

To help overcome this devastating disease, follow the link below to donate to the work of scientists like Professor Frazer, whose latest project is looking at a vaccine for melanoma.