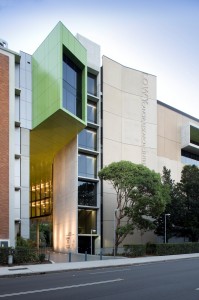 The new facility opens with the help of a $3.1 million grant from ACRF and features the ACRF Drug Discovery Centre for Childhood Cancer, equipped with advanced cancer screening technologies essential to finding and confirming new cancer targets and pathways.

During the official tour of the new facility with the NSW Premier, the Prime Minister said that the Centre will greatly support cancer treatments and cure.

“The Lowy Cancer Research Centre is a critical step in supporting our world-leading cancer researchers, whose discoveries will directly translate into better patient care and carry the potential to save generations from cancer,” Mr Rudd said.

Researchers at the Centre will investigate ways to develop cancer-fighting drugs, with three of the drugs to commence clinical trials this year.

During a recent sneak preview of the facility for ACRF staff, Dr Greg Arndt, Manager of the ACRF Drug Discovery Centre, said that the advanced automation systems at the center will reduce time and costs for identifying successful anti-cancer drugs.

The ACRF-funded equipment dramatically improves the speed and accuracy of cancer research, allowing scientists to reduce work that takes three months down to a single hour.

“The first robot is the Hamilton STAR liquid handler integrated with a cell incubator, assay readout detector and cell washer,” he said.

“The second system is a stand-alone automated liquid handler (Hamilton Nimbus) based within a biological safety hood to allow for smaller-scale screening of small molecule drugs against different cancer cell models”.

The Lowy Cancer Research Centre will house up to 400 scientists, including two winners and several recognitions of leading researchers for the 2010 NSW Premier’s awards.

“Our aim is to cure 100 percent of childhood cancers and turn adult cancer into a manageable disease like diabetes, so cancer sufferers can lead long and productive lives,” inaugural Centre Director and 2009 NSW Cancer Researcher of the Year, Professor Phil Hogg, said.

UNSW Vice-Chancellor Professor Fred Hilmer said: “I believe this world-class Centre will take cancer research in this country to a new level, helping to put Australia at the forefront of efforts to find cures for childhood and adult cancers.”

ACRF is proud to support the opening of the new Centre and joins leading Australian researchers in the urgent fight against cancer.