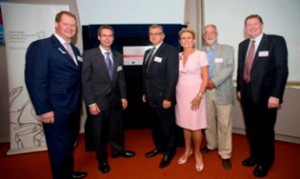 The Australian Cancer Research Foundation, set up by Sir Peter Abeles, was thrilled to be present at the opening of a brand new cutting-edge facility made possible by its largest ever grant of $5 million to a consortium of leading cancer research institutes to support work in Melbourne that will bring new hope to cancer sufferers.

The opening was announced in honour of Sir Peter Abeles. It is an alliance comprising the Royal Melbourne Hospital, the Royal Women’s Hospital, the Ludwig Institute for Cancer Research, The Walter and Eliza Hall Institute of Medical Research and The University of Melbourne (Faculty of Medicine, Dentistry and Health Sciences).

“The ACRF is funding great research across Australia, but none better than here in Victoria – this new $5 million research grant takes the amount we’ve awarded to Melbourne cancer research centres to over $16 million – this includes funds to St Vincents, Ludwig, WEHI, Austin, Murdoch Childrens, the Royal Melbourne, and just a few weeks ago $2.5 million to the Peter MacCallum,’’ Dery told the audience.