One nutter takes on the Americas 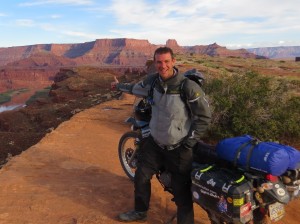 For many cancer survivors, fundraising to give back to cancer research is often about making the most of a challenge or adventure.

Testicular cancer survivor, David Melville, is using this very approach. Having shown cancer who’s boss, David is now grabbing life with a solo motorcycling adventure from Canada all the way to the southern-most tip of South America.

He set off on August 19,2014 from Vancouver, Canada, heading south to Tierra Del Fuego Argentina and planned to stop in to plenty of cities, fundraising as he went.

Starting a cheeky blog called One Nutter, David has documented his journey so far; telling tales of his epic adventure and how it all began.

David said, “Since [going into remission] I’ve done some basic social work talking to other guys who’d just been diagnosed, but I’ve always wanted to do a bit more to give back.”

David was only 22 years old when he was diagnosed with testicular cancer and after several operations and treatments was, thankfully, given the all clear.

David hopes that this ride will help raise some funds to help give back to all those people who helped him through his cancer journey – family, the medical professionals and the researchers behind the scenes.

David has already most generously raised over $1,700 for cancer research and, having just reached Costa Rica, is having the time of his life seeing some amazing sites and raising awareness along the way.

We’d like to thank David for taking on this epic challenge in support of cancer research in Australia and wish him the very best of luck for the remainder of his journey.

If you would like to keep up with David’s trip Down to Argentina, visit his blog or support him by donating here.