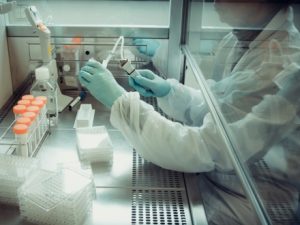 Researchers at the Harry Perkins Institute of Medical Research have developed a new method to tackle triple negative breast cancer. It is an aggressive form of cancer with few treatment options.

Triple negative breast cancer can become highly resistant to chemotherapy and patients often relapse after remission. The new study has found that chemotherapy resistance is linked to a DNA-altering protein, which is found in two places in the body, the brain and the breast. In the brain the protein works to protect neurons from damage, warding off brain cell death that could lead to Parkinson’s Disease. In breast tissue, the protein triggers cancer cell growth, spread and chemotherapy resistance.

Study leader Dr Anabel Sorolla said nanoparticles developed by her team have been shown to be more effective than those currently used to treat patients. They work by blocking the DNA-altering protein and delivering chemotherapy drugs directly to the tumour, while also making the cancer cells more susceptible to chemotherapy.

“We have found that our nanoparticles only trigger cell death in this highly aggressive form of breast cancer, not in healthy cells,” Dr Sorolla said.

The team is currently testing a targeting molecule that functions like a GPS navigator and sends the nanoparticles straight to the tumour site.

“On the whole, when we combine existing anticancer drugs with our nanoparticles we can greatly reduce the dose of chemotherapy needed, with better results and less side effects,” Dr Sorrolla concluded.

More than one in every ten breast cancers are found to be triple negative. You can find out more about all types of breast cancer and breast cancer signs and symptoms on the dedicated www.breast.cancerresearch site managed by the Australian Cancer Research Foundation (ACRF).