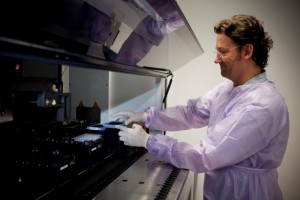 “The days of the one-size-fits-all approach to medicine will soon be over, thanks to the work of researchers at facilities such as the ACRF Drug Discovery Centre.

“Targeted drug treatments can ensure fewer long term side effects and better results, and that’s the kind of outcome that motivates the people who so kindly donate to the Australian Cancer Research Foundation,” he said.New centre

The ACRF Drug Discovery Centre is a vital part of the Children’s Cancer Institute Australia, which operates from the Lowy Cancer Research Centre on the campus of the University of NSW.

It houses new robotic technology that enables one year’s medical research to be completed in just days.

This drug screening technology is the only one of its kind in Australia devoted to childhood cancers.

The Centre’s technology allows thousands of small molecule drugs to be rapidly screened to identify which ones have the potential to be developed into safer, more effective therapies that hit only on aggressive cancer cells, while sparing normal healthy tissue.

“It took CCIA five years to manually search through thousands of potential drug candidates to find one of CCIA’s most promising drugs in development for childhood cancer. With this drug screening robot we could potentially discover effective drug candidates within days,” Professor Norris said.

“Our work involves identifying genes that are abnormally switched on in a child’s tumour and then finding a potential drug that can switch off or change the behaviour of that gene.

“For example, we have identified a gene that is switched on in children’s cancers that responds badly or is resistant to chemotherapy. Once this gene is switched off those whose cancers have been resistant to traditional cancer therapies can now respond better to treatment.

“This new screening technology can save years of research and boosts better outcomes for children with cancer,” he said.

Executive director of the Children’s Cancer Institute Australia Michelle Haber said, “CCIA is committed to translating drug discoveries at the bench into real outcomes for children at the bedside, improving the quality of care as well as access to new technology.

“These things would not be possible without the support of organisations such as the Australian Cancer Research Foundation,” Professor Haber said.