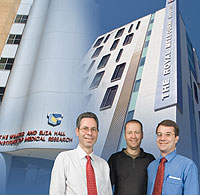 The Australian Cancer Research Foundation has awarded its largest ever grant of $5 million to a consortium of leading cancer research institutes to support work that will bring new hope to cancer sufferers. The grant is in honour of Sir Peter Abeles,AC who founded ACRF.

The grant was awarded to an alliance comprising the Royal Melbourne Hospital, the Royal Women’s Hospital, the Ludwig Institute for Cancer Research, The Walter and Eliza Hall Institute of Medical Research and The University of Melbourne (Faculty of Medicine, Dentistry and Health Sciences).

“The consortium will apply the $5 million grant to establish the ACRF Centre for Therapeutic Target Discovery , potentially forming a scientific cornerstone of the first comprehensive cancer centre established in Australia. The Centre will create an innovative Australian-first collaborative and integrated cancer research centre, where clinicians, diagnosing and treating cancer patients, will work closely with scientists researching the disease, said ACRF chairman Tom Dery.

This initiative signifies the beginning of an Australia-first integrated cancer research project which is expected to widen in scope to encompass new research approaches.

The consortium, led by A/Prof Geoffrey Lindeman, is a highly regarded team of internationally recognised scientists and clinicians with excellent track-records. They will focus initially on specific diseases including bowel and breast cancer.

Professor Sir David Lane, the scientist renowned for his discovery in 1979 of the tumour-suppressing protein p53, and Director of the Cancer Research UK Transformation Research Group at the University of Dundee in Scotland, provided input on short listed applicants for the grant and describes the winning team as “world-class”.

“This consortium is competing at the very top in its field on a worldwide basis,” Professor Lane said. “There is a very real chance it will come out with new treatments for cancer.”

Professor Douglas Hilton, Head of Division of Molecular Medicine at the Walter and Eliza Hall Institute and A/Prof Andrew Roberts, Clinical Haematologist and NHMRC Practitioner Fellow speaking recently on the new project said: ”It is important for an individual or group of people trained in science to have access to the large breadth of knowledge provided by a diverse group of scientists and clinicians to tackle different problems” said Professor Hilton. “The $5 million ACRF grant has delivered funding that can be targeted at critical research that draws clinicians and scientists together. It will also help us leverage funding from other bodies. This is the start of a snowball effect.”

The consortium has already made significant progress in drug discovery research and this is expected to result in the development of new experimental therapies for cancer sufferers according to Professor Hilton. “A lot of cancers are still very difficult to treat and we want to provide hope to people where there isn’t hope now, in the same way Professor Ian Frazer has with his discovery of a cervical cancer vaccine” he said. “Ultimately, what we want is the same thing ACRF and the people who support ACRF want. ACRF is a visionary group – they know cancer research is about long term goals .”

Professor Hilton pointed out that “drugs inhibit proteins and proteins are encoded by genes. We know of all the genes and the job now is to work out which are the best targets for treating cancer,” he said. “It’s as though we have the key to an enormous library and now it’s a matter of learning to read the books and use the information we find.”

A/Prof. Roberts added that the discovery of the human genome signified a “new era” for collaborative cancer research . “The genomic information we have offers the possibility for targeted therapies and for personal therapies” he said. “This is a superficially simple idea – but there are 30,000 potential targets in each cell. What are the best for each cancer type? There are millions of potential chemical therapeutics. Again, which is the best with the least off-target effects?” said A/Prof Roberts. “We need smart people with a variety of skills to find new ways of sifting through this information and applying this knowledge”.

“Our vision for advancing targeted therapy at the ACRF Centre for Therapeutic Target Discovery is to identify validated targets within cells, target cancer stem cells and also non-cancerous cells that spport cancer growth and pick for development those targets whose effects are proven in cancer cells from patients and in animal models” A/Prof. Roberts said.

The ACRF received thirteen applications from leading cancer research teams around Australia for the $5 million grant (NSW 3, Vic 3, Qld 4, ACT 1, WA 1, Tas 1). “The ACRF grant application process was very competitive, and it is an enormous honour to be awarded its largest grant ever,” said Professor Hilton.

The ACRF has awarded $50 million to leading cancer research projects since its establishment in 1984 by Sir Peter Abeles, in whose honour this grant was awarded. More than $20 million of those grants have been made in the last two years. For a listing of all cancer research grants awarded by ACRF, click here.