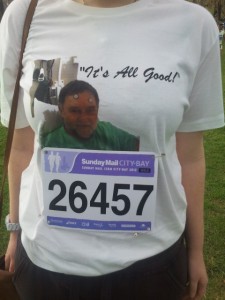 The 40th annual City Bay Fun Run brought out a record number of competitors with over 39,000 people taking part in the milestone event. The Australian Cancer Research Foundation (ACRF) is pleased to have had a fantastic group of supporters taking part on the day helping to make this the most successful year of City Bay yet!

The dreary (and at some times drenching) weather did nothing to dampen the spirit of the day with the community and atmosphere lifting the runners into completing great races. For some supporters, like the Red Robyns, it was a day to walk in honour of a loved one they had lost to cancer. Her battle with cancer was lost earlier in the year and the team formed to run in honour of their beautiful mum “to give something back; just as our beautiful Mum did towards everyone who knew her”.

Other ACRF supporters were running in support of those in their life that had fought cancer, were fighting cancer, or had watched their loved ones pass away due to cancer. For our youngest supporter, 12 year old Alex, it was a chance to do a school community service project for a charity that has benefitted both his parents and uncle in their cancer battles throughout his young life. All our supporters believed that research was the key to ultimately being able to beat cancer for future generations.

We would like to say a very big thank you to all our great competitors for your amazing support – raising almost $10,000 for cancer research! We congratulate all of you on your race and your fantastic fundraising, so thanks again Ads & Jez, Alex, Danielle, Kyra, Lisa, Megan, Natalie, Shane & Team Red Robyn!