Mark’s eyes are on the finish line 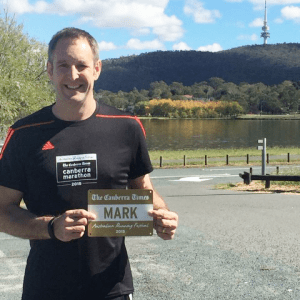 “I am 44 years old and have lived in Australia now for over 10 years. Last year, I had a very big scare when I was diagnosed with kidney cancer and had to have my kidney removed as a result.

Discovering the cancer was completely incidental. I had no symptoms or impaired renal function. About eight months ago I was admitted to the hospital with lower bowel pain. The doctors performed a CT scan and found that I had colitis.

They also noticed something that looked like a cyst in my right kidney. They advised me to get it investigated further so a few weeks later I had another scan. The result came back as “consistent with a cystic renal cell carcinoma.” It was in the very centre of my kidney.

It was just two months from when we first saw the mass, to when I underwent surgery to remove my whole kidney. In that time the mass had doubled in size and the final pathology found that it was a grade 2 cystic renal cell carcinoma.

Whilst I have enjoyed a good recovery and my prognosis is very good, there are many people and families who are not so fortunate. We need better diagnosis and treatments to help battle this terrible illness that has struck down so many of our loved ones. To help raise funds for cancer research, I decided to run in the Australian Running Festival’s Canberra Times half marathon.

In 2015, I participated in the half marathon to prove to myself that I could still be healthy and active after a spinal fusion I’d had a few years earlier. This year I’ll be motivated to raise funds for cancer research, not only because of my own battle but for all my family and friends who have battled cancer, many of whom have sadly passed away.

I want to try for a personal best but I have had to make big changes to my training. The biggest being that that I have only had eight weeks to prepare. Prior to that, I was not allowed to do any exercise, as I had to allow the stomach muscles to completely heal. It will make this year’s half marathon very challenging for me but running is not just about the physical activity, it also takes mental endurance.

I hope that we can encourage more people to support cancer research so that the teams of scientists – the unsung heroes in this battle, can achieve breakthroughs that save lives.

Thank you to everyone who has helped and supported me over the past six months as I have recovered and to those who have so generously donated to my page.” – ACRF supporter, Mark Potten.