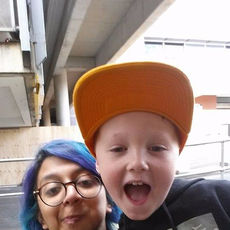 “Cancer is not just something that happens in a galaxy far, far away. Early last year, my eight-year-old nephew was diagnosed with Langerhans Cell Histiocytosis (LCH), a rare form of cancer that affects young children. As he bravely goes through treatment for this disease, I wanted to do something on his behalf.

I often like to joke and say that my nephew is more like me than his own mother, who is my older sister. Like me, he has a love of Star Wars, superheroes and video games and has even built a basic video game himself. My nephew has been having chemotherapy for a year now and the disease is currently in remission.

Previous to my nephew’s diagnosis, no one close to our family had been affected by cancer. It was a reality check that cancer can happen to anyone. We are lucky that my nephew’s form of cancer is treatable and with a high survival rate. ACRF does a great deal of research into LCH and other childhood cancers and is one of the reasons my nephew is doing so well today. 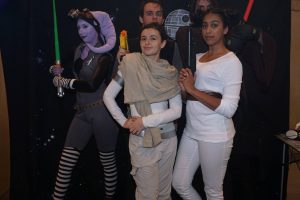 When I decided to fundraise for the Australian Cancer Research Foundation, it was an easy decision to combine two of my favourite things: Stars Wars and selfies.

A group of nerdy volunteers and myself, dressed up as characters from the Star Wars Universe and set up a photo-booth at Wollongong Central on March 12.

For a donation, face painting, props and knick-knacks were available for anyone to dress up and snap photos with some out-of-this-galaxy characters. Twi’lek, Jedi and Droids joined forces with us to raise awareness and money for much-needed cancer research. The public response was fantastic, and we reached our fundraising goal.

The researchers, doctors, nurses and medical staff who help patients living with cancer every day are truly special. They inspire me to continue fundraising for cancer research. Together we can defeat this dark disease so more children can see the stars. May the cure be with us!” – ACRF supporter, Lyss

To organise an awesome event of your own you can visit our A-Z fundraising ideas page.