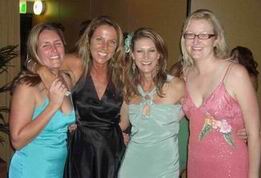 2004 Australian ironman champion Zane Holmes was the star attraction at the inaugural ‘Life Savers for Cancer Research Charity Ball’ at the Ballina RSL on Friday October 7.

23-year-old Holmes, who is based on the Gold Coast, joined a host of VIP guests on the night to raise funds for the Ballina Lighthouse & Lismore Surf Life Saving Club (SLSC) and the Australian Cancer Research Foundation (ACRF).

“There are still too many people who drown on our expansive beaches or whose lives are threatened or cut short by the insidious disease of skin cancer,” said Mr Kelly. “Yet there are thousands of others who have been given a second chance at life, thanks to the work of the heroes at organisations like the Ballina Lighthouse & Lismore SLSC and Australian Cancer Research Foundation.

“Given the popularity of Ballina’s beaches to both locals and tourists, and the high incidence of skin cancer in Australia, it’s in all of our best interests to ensure that both these organisations obtain the right equipment, training and infrastructure to do what they do best – provide a safe and fun beach environment and support world class cancer research in Australia,” said Mr Kelly.

Guests attending Life Savers for Cancer Research experienced an unforgettable night of feasting and dancing (renowned Tweed big band Jumpstart had everyone up on the dance floor). In addition, guests were given the opportunity to bid on a number of ‘money can’t buy’ auction items or go into the raffle to win some very special prizes (first prize was a Sydney Entertainment Centre Show package – flights, show tickets and accommodation included).

One of the most popular auction items on the night was the RSL’s award-winning executive chef Gerhard Spatz. The winning bidder paid $1650 to secure Spatz for a dinner party for eight people in their own home.

The event was sponsored by the Ballina RSL CLub and raised almost $7000.