Lady McMahon – a message from the Chairman 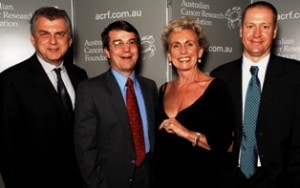 Our hearts go out to the family of Lady Sonia McMahon.

Over 26 years ago Lady McMahon approached Sir Peter Abeles to head up a new charity for medical research, dealing specifically with cancer. With a small group of Sydney philanthropists, she co-opted Sir Peter to establish the Australian Cancer Research Foundation in 1984, following the closure of Sydney Hospital which the group had been supporting.

Since that time over $60 million has been awarded to outstanding, major cancer research projects in Australia, going directly to our top scientists to help fight cancer, including Professor Ian Frazer who discovered the vaccine to prevent and treat cervical cancer.

In the picture above, we have just announced the recipients of the first ever $5million private grant for cancer research to Professor Andrew Roberts (2nd from left) and Professor Doug Hilton (far right).

Lady McMahon’s commitment and loyalty have been a huge factor in the success of the Australian Cancer Research Foundation.

She will be greatly missed by fellow Trustees, staff and our many supporters.