Kicking it for Kieran 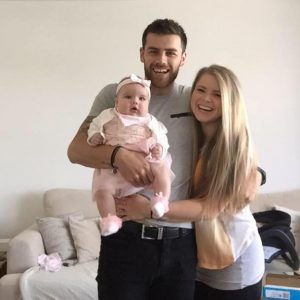 “My name is Iain Chisholm. Over the last few months, I’ve been truly inspired and heartened (though not surprised) as I watched my community back home in the North East of England band together and support one of our own, Kieran Wrightson, as he goes through one of the toughest experiences of his life.

Kieran is a talented footballer and FA Vase winner from my hometown. He is a 25-year-old father of one, about to get married.

Earlier this year his world was turned upside down when he found a lump in one of his testicles. His doctors delivered the devastating news that it was cancerous and that it would have to be removed.

In an interview, Kieran said ‘it came completely out of the blue – I don’t drink, I don’t smoke, I’m a young fit lad who plays football. The doctors made it clear that I had a good deal. I’d caught it early and testicular cancer is one of the easiest to treat. I had it removed on May 2, which was also my birthday.’

Myself and my fellow expats in Brisbane have been touched by Kieran’s situation, particularly as we are mostly young(ish) footballers enjoying life and earning an honest living for ourselves and our loved ones. Naturally, it didn’t take much effort in getting the ‘Brisbane family’ on board to show some support.

With Kieran’s blessing, I was delighted to get my friends together and arrange a fundraiser to support cancer research in his name.

This past Saturday, we challenged ourselves to set off in the early morning on a self-guided group hike and rock climb (9km/4hours) to the summit (1.2km high) of Mount Warning for a spectacular Australian sunrise.

This was followed by a late afternoon charity football match at Bayside United which saw my team the ‘Geordie XI’ which I captain, take on ‘Mackem XI’ captained by my fellow event organiser, Ben Ryan.

We’re proud to raise funds for cancer research in Kieran’s name. If you’d like to join us in supporting these two charities you can donate to our page here. #ClimbForCancer #KickAboutForKieran.” – ACRF supporter, Iain Chisholm