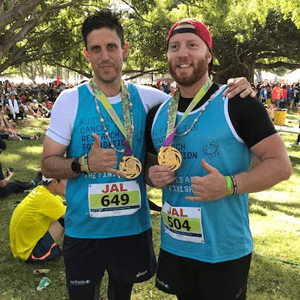 In December 2015, Joshua Toth, his wife Jane and son Charlie were overjoyed to welcome baby Luke into their family. However, at ten weeks old, Luke was diagnosed with a rare and aggressive Rhabdoid tumour. Despite the best efforts of a team of doctors and nurses at Westmead Children’s Hospital, Luke passed away at six months of age.

“Never in a million years did I think our family would experience what we have in the past two years. Not a day goes by that we don’t wish it was possible to see Luke again. Losing a child to cancer also has us constantly thinking of ways to ensure that no other family has to endure what we’ve been through. For the past two years, Jane and I have been drawn to organisations that dedicate their time, money and effort towards research that will hopefully lead to all forms of cancer becoming a curable disease in the near future. In 2016, our family and friends raised a reasonable amount of money for Children’s Cancer Institute of Australia.

I happened across the ACRF running fundraising site in January 2017 while doing some web searches on various organisations that support cancer research. I was inspired by ACRF’s mission to end cancer and one phone call to them was all it took for me to decide to fundraise for ACRF as part of my participation in Honolulu Marathon 2017. Taking on what is described as 26.2 miles in paradise was going to be challenging as my only other distance running experience had been a 10km run in Homebush almost ten years ago. Although I would be 40 by the time the Honolulu marathon got underway in December, it seemed like do it now or never, in my head anyway. Joining in the race with me was my younger brother Brad who has been through a similarly tragic time when his son passed away very soon after birth. We gave the run everything we had on the day and finished within a few minutes of each other in our respective age groups.

It is estimated that over 134,000 Australians will be diagnosed in 2018 with some form of cancer and one out of every two people will be directed affected by cancer. We have made so much progress against other diseases, it’s hard to believe there is still no cure for this insidious disease, especially childhood cancer. I am grateful there are organisations like ACRF that dedicate themselves to cancer research, and thankful that I can contribute to raising awareness and facilitating that research.”