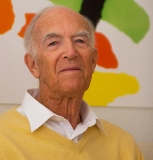 Australia’s most iconic building, the masterpiece Sydney Opera House is to be depicted in a series of photos in a stunning new book, proceeds from which will aid the ACRF.

The highly anticipated publication ‘Jørn Utzon’s Sydney Opera House, A Tribute’ , is expected to be one of the bestselling illustrated titles of 2009. Its superb quality of production, incredible images and the co-operation of architect Jørn Utzon family’ sets it apart from any other book ever published on the world famous Sydney Opera House – which he never saw completed with his own eyes.

Both a personal illustrated memoir and a tribute to this great architect, the ART Book Project embodies the spirit of Jørn Utzon in a remarkable way as it includes a foreword and last word by the award winning architect himself, personal stories and anecdotes, unpublished photographs from the Utzon archive including photographs of Jørn at his home in Hellebaek, and unpublished sketches of the Sydney Opera House.

In 2007, work began between young talented photographer Katarina Stuebe and the brilliant Jørn Utzon on the creation and publication of this book. Sadly, the master died in Copenhagen, Denmark, aged 90 on 29 November 2008, before the book was completed.

“Jørn Utzon was a Dane of great consequence, a man who saw visions in architecture that others could only dream on,” said the book’s creator Katarina Stuebe, who has spent many years observing and photographing the Sydney Opera House.

Through his masterpiece, he will be proudly remembered for many generations to come and I deeply hope that I can touch you with my photographic approach capturing his tour de force.”

Stuebe said was thrilled some proceeds would go to aid the work of the ACRF.

“I really wanted my work to benefit a well respected Australian charity and the work of the ACRF was recommended to me by a number of people. Cancer is close to my heart as my beloved Grandfather died on the disease. I also know there is a real problem with cancer in this country because of all the sunlight you guys get.

When I found out that Australian born Princess Mary, of Denmark was into supporting cancer research that clinched it.”

Jørn Utzon’s Sydney Opera House, A Tribute is a photographic journey of the Sydney Opera House and the story of Jørn Utzon, the gifted architect and Katarina, the young German architectural student and photographer, who fell in love with a building and set out to understand how one of the wonders of the world was created.

Katarina’s photographs are accompanied by a narrative text chronicling her journey together with anecdotes from Jan about the life of the Utzon family and the building of arguably the most iconic structure in modern history.

Through a number of serendipitous opportunities, photographer Katarina Stuebe met Jørn Utzon. Each year the Utzon family are sent literally thousands of photographs of the Sydney Opera House from people who have a love of the building, however something in Katarina’s photographs stood out from the rest.

Her parents moved to Majorca where, coincidentally, Jørn Utzon himself was living.

It took another three years before she finally sent an email to Jan Utzon which resulted in a meeting with his father.

Jan encouraged her to make contact with Jørn, who she eventually met and with whom she had an instant rapport.

In this book, Katarina has managed to capture the unique spirit of one of the world’s true geniuses.

Following her visit to Jørn, he wrote this letter:

Thank you for visiting me and thank you for your beautiful photographs of the Sydney Opera House. It is wonderful to see your interpretation of the building. Many of the images remind me of my first conceptual sketches for the shells.

The evocative shapes and the sense of anticipation and adventure come out so well in your pictures. Your visual treatment of the shapes and textures, your use of light and shade to create a dream-like mood in each picture makes your photos stand out among the thousands of photos taken of the Opera House each year.

I hope you will get a chance to publish these wonderful pictures, as they certainly deserve to be seen by a larger audience than just me.

My warm regards and best wishes for your talent,

For more information about the Photo Book in aid of cancer research, email ACRF at info@acrf.com.au