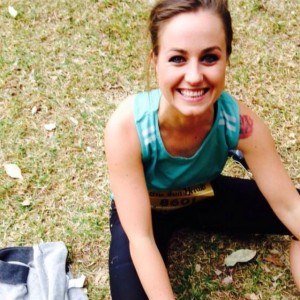 Jess is an incredibly positive young woman with a close connection to cancer research. We are honoured to have her join us this year as our Ambassador.

The last time Jess ran with Team ACRF was in 2014. Her Dad had been diagnosed with cancer eight years earlier, and she ran in support of his journey. After crossing the finish line, having raised over $1,600 for cancer research, she celebrated with a toast to her Dad.

This year Jess will be running again.

“I’m passionate about cancer research because I lost my Dad to cancer in April this year.

A month before we lost him, I watched him walk up the hospital hallway and achieve the massive goal he had been working towards with his physio team. It seemed impossible to most of us, but he was always determined to get better.

He was a fighter, not just as a fireman, but in the way he refused to give up.

We were fortunate that he qualified for numerous medical trials which managed to get him through each year. For ten years they kept coming back with something new, like a magic trick that the researchers would pull out of a hat.

Each new trial medication that came around, he would give it a go – no matter what. There were many years where we thought to ourselves: ‘This is it. This is the last Christmas, this is the last father’s day’…but it never was.

Thanks to those trials our family was able to spend more precious time with him, which meant so much to us. 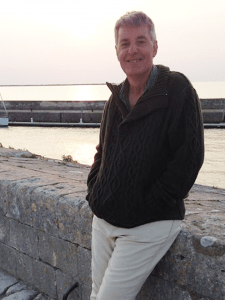 Dad loved to travel, so we were able to get in some extra holidays together. He also had the chance to ensure his family, including his now 94-year-old Mum, would be okay. We even managed to squeeze in a few more parties with him!

Mum and I were playing all his favourite songs on his last day, one of those songs was Margaritaville by Jimmy Buffett. We were dancing around his bed like mad women.They say that hearing is the last thing to go, so I just know this would have made him happy.

He suffered many different cancers over the last ten years, but it was brain cancer that took him in the end. I feel that was the worst for him to go through. I’d really like to see a trial medication to treat this, other than steroids and pain killers. I know researchers are going to get there in time.

This is why I have decided to participate in this year’s City2Surf for cancer research. It’s a great way to support a great cause.

I’m not the best runner, but I really enjoy it. I think it will probably be quite a challenge as I haven’t been running for quite a while. My Dad was always telling me to get back into it, so now I’m doing it!

I think he would really love that I’m getting involved. He always liked to make sure he thanked people when they helped him. So this is my thank you on his behalf.

I’ll know I’ll probably cry through the finish line, but afterwards, I plan to throw one hell of a party! That’s how he would do it!” Jessica Broome ACRF City2Surf Ambassador