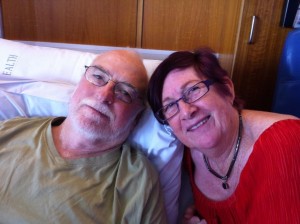 “Ian and I will have been married for 46 years next month. We have spent very little time apart in those years. We have three adult children and four grandchildren. We both grew up in the country but spent some time in Brisbane before settling in the rural town of D’Aguilar, Queensland.

On Valentine’s Day in 2004, a year after we moved, I found a lump and was diagnosed with breast cancer.

I had to undergo a major operation and travel to the city for daily radium treatments. Not only did cancer have a physical impact on my body, but it also affected me emotionally and financially. For a number of years after, I suffered panic attacks and became a recluse which made it incredibly difficult to work. Six years after my first diagnosis the breast cancer was back.

Thankfully we managed to get through it all together. We never used to celebrate Valentine’s Day, but we do now because I am all clear and have been for six years now.

However, our fight against this disease wasn’t over. A week before Christmas in 2014, Ian went to see the doctor in severe pain and he was diagnosed with pancreatic cancer. The doctors told him that unfortunately there was nothing they could do for him and that he should go home and get his affairs in order and enjoy what time he had left.

After we had got all of our affairs in order, our son suggested we have a “wake” as Ian was always saying how unfair it was that you’re not there to party with your friends and family when you die. So we had a pre-departure wake last year. It was just what we both needed – over 120 people came and it was a fantastic day.

During the day of celebrations, Ian told everyone to save the date for an ‘I’m Still Standing’ celebration in 2016 as he would still be here. And he was right.

Because Ian was keeping well, his doctors did an endless amount of scans, blood tests, and biopsies and discovered that he had a Neuroendocrine Tumour. This is a slow-growing form of pancreatic cancer, but it is still terminal. It has been an endless roller coaster ride of emotions, with a lot of twists and turns, but we are grateful for this extra time to enjoy together.

Cancer is an insidious disease that affects so many people. In the past five years, we’ve lost two brothers-in-law, I very recently lost my brother, and now I’m losing a good friend, and my husband – all to terminal cancer.

I nearly lost Ian at Christmas this year, but the fantastic staff at the Redcliffe Oncology performed a miracle and like Ian had promised, he is still here. My darling Ian is such a fighter, so I have decided to make his “I’m Still Standing” celebration day into a fundraiser for cancer research. I wanted to make a difference and help the dedicated and hardworking researchers bring an end to cancer.

We have been very humbled by the wonderful love and support of family and friends and even strangers. While I have been organising the fundraiser I have been blown away by people’s generosity. Thank you to everyone who has kindly helped this day come together. It’s going to be a fantastic event filled with lots of music, laughter, great prizes and everyone is welcome. We’ll also hold an auction, a cut and colour for cancer and have an open mic for anyone who wants to sing on the day.

I would really encourage others to donate or fundraise for cancer research because you may one day help save someone you love!

I hope that maybe our story will give someone else some comfort in their own struggle with cancer.” ACRF supporter, Carol Robinson