Having a Ball for the ACRF – Masquerade Ball 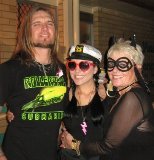 For what chief organizer Carmel McMahon describes as ”just a backyard affair”, her annual fundraising dinner for ACRF, is now a much looked forward to fixture on the Brisbane social calendar and continues to grow each year.

“It was a great night and you were not allowed in if you did not have a mask on,” laughed Carmel recently.

“I myself was dressed as a ‘Satanic Cat Woman’ but we also had a Zorro and a baby that looked gorgeous in a little tiger suit.”

“I couldn’t have done it without my core group of six girlfriends who all bring a different dish. Everyone is invited and we had three generations of people there this year including my sons, girlfriends, neighbors and people’s parents.”

Carmel’s fundraiser had been taking place annually since 2005 and is a glamorous sit down dinner in her beautiful back yard.

A hairdresser in her 50s, she said her mum and sister passed away from cancer several years back and she herself had been diagnosed with asbestosis.

“Yes I do have it sadly but I refuse to let it get me down and try and stay positive,” she said.

“My Mum Beth Franklin did a lot of charity work which she got involved with right back after World War II.”

“She actually won a Queensland Premier’s award for her good work.”

“My Mum was a big fan of Lady (Sonia) McMahon so it was a real thrill to meet Sonia myself when I was invited down to Sydney last year for the annual ACRF Chairman’s dinner at the Opera House. Mum always thought she was such a snappy dresser.”

“Another highlight for me was meeting the ACRF’S Errik Hasim. I often talk to him on the phone and he has always been very supportive so it was great to put a name to a face.”