Half Marathon takes over Sydney 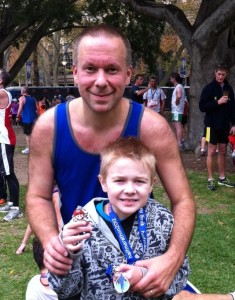 For the 21st year, the Sydney Morning Herald Half Marathon flooded the streets of Sydney with over 16,000 runners taking part. Among these were a wonderful group of supporters fundraising for cancer research.

When asked why they chose to support cancer research in this way, many competitors were running in honour of their family members and friends who had been affected by cancer in their lives and in some cases lost to cancer. For others it was a focus on the importance of research in the hope that “the more money that is raised the closer we will get to finding a cure”.

As the challenge of the half marathon loomed some competitors were feeling confident to better their times from previous years, others were nervous of the task ahead in taking on their first half marathon, and sadly others were unable to compete due to injuries.

All in all the day was a great success for our wonderful supporters with many beating their target times, and some more than exceeding their fundraising targets as well.

Thanks again to you all and your supporters for your generosity to the work of the Australian Cancer Research Foundation, and we hope that we’ll see you again next year!

Are you interested in a participating in a charity fun run to fundraise for cancer? Check out our sporting events page for upcoming events.