Game on for the ACRF 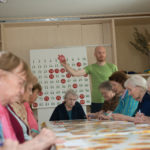 The air was filled with familiar bingo shout outs and laughs when a series of games was held recently to raise much appreciated funds for the ACRF.

Proving the versatility of our supporters who use a variety of methods to raise funds for the ACRF, “Bingo Games & Afternoon Tea” was organized by supporters Neville & Marie Holmes in Rochedale of south Queensland.

Their creativity and hard work raised an impressive $3,700!

According to Marie, “More than 60 people attended to make the event an enjoyable and entertaining afternoon. There were lots of laughs and good times had by all those that attended”.

The “Bingo Games & Afternoon Tea” event in support of the ACRF was held to honor the memory of her son David, aged 37, who died from cancer in December 2008.

“As a family we wanted to give something back to others, so we decided we would like to have a fundraiser to support the ACRF to help find a cure for this disease.

We intend to have an annual event to support the ACRF and all agreed that Bingo Games was a fantastic first start”.

We couldn’t agree more and wish Neville and Marie continued success. Thank you for your creative support!