Fred Pham 500 off to a great start 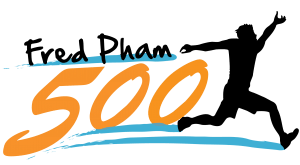 Wow, you have to admire the stamina of Fred Pham supporter Kimberley Ung who was one of the first of the Australian Cancer Research Foundation’s supporters across the finish line in the recent Blackmores Sydney Running Festival nine-kilometer Marathon presented by the Sunday Telegraph.

“Yes, my legs were sore the next day” said the bubbly 19 year old recently after the race on September 19.

Kimberley said she took 55 minutes to complete the nine-kilometer course.

“A group of about 15 of us Fred Pham 500 supporters took part. Actually Fred was even there and did the course pushed around in his wheelchair. He was accompanied by his three beautiful daughters.”

Kimberley was one of the four former students of teacher Fred Pham, who have instigated the recent campaign to raise $100,000 for their “inspirational friend.”

“Fred has always been a mentor for me,” she said.

“He has played a huge role in my life.”

“He was such an interesting teacher and used to fascinate me with stories of his travels. I kept in contact with him after I left school.”

Kimberley said she had heard the news late last year that Fred had been struck by cancer and was a member of the team of supporters determined to rally behind him.

The simply unstoppable Fred Pham raised more than $30,000 for the ACRF and as the highest individual fundraiser in this year’s City2Surf marathon attracted a further $10,000 donation from race organizers.

Now many in the Vietnamese community of Australia are rallying to honor one of their most illustrious members and to boost his fundraising efforts, as they say thank you to Australia upon commemorating 35 years of Vietnamese-Australian settlement. 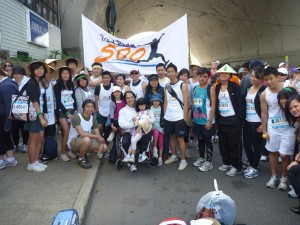 Thanks to Kimberley and people like the charismatic Tam Hoang, supporters from all around Australia have now rallied to organize three Fred Pham 500 marathon-running events, which will take place in Sydney, Melbourne and Brisbane.

“Many people wish to help Fred Pham realise his dream of raising more than $100,000 before he dies, which unfortunately according to doctors might be sooner rather than later,“ said Kimberley.

“We are all now looking forward to the St George Melbourne Marathon on October 10 when more supporters will run in honour of Fred Pham.”

Japanese athlete Jun Watanabe won the men’s half marathon in a time of 1hour 6mins and 20secs. 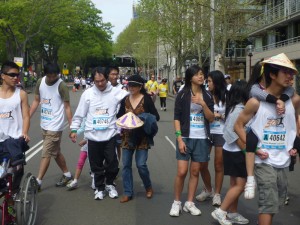 In total there were 34,200 competitors, with entrants from 60 countries and around 1500 runners from interstate who took place in the various marathons.

All the races finished outside the Opera House.

To promote the Fred Pham 500’s fundraising efforts, gifted young Vietnamese composer Van-Anh Nguyen has written a song in English, featuring the voice of Australian Idol Top 10 Finalist Thanh Bui, to promote the cause of Fred Pham after being moved to respond when she heard his story.

Van-Anh Nguyen’s new tune is called “I’ll Keep Running” and is an inspiring radio friendly track which deserves to be heard.