Derrin runs to support cancer research in memory of her dad 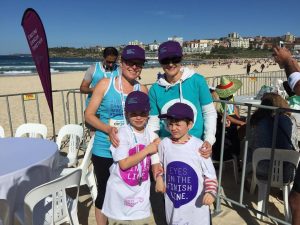 “A year and a half ago, on the 18 June 2015, I held my beautiful Dad’s hand as mesothelioma consumed his twinkle. His love for Mum and our family, his lifetime of friendships, adventures, kindnesses and dedication had come to end. They were dark days but I knew from running City to Surf in 2014 that I could do something to help.

I had run the City2Surf as a tribute to my uncle, who died of early-onset Alzheimer’s and I just loved the challenge, comradery and community spirit of the event. I also loved the self-esteem it gave me from knowing I had run that far and raised lots of money. So when my father, Norman, died last year I knew it was the perfect, positive way for me to bring together so many people from all aspects of his life to keep him in our thoughts and reflect on what a great bloke he was.

My father was a very conscientious, hard-working, proud man with a mischievous sense of humour. He left school early but worked hard later in life to improve his qualifications and provide a role model for my brother and I. And I guess it worked because we both graduated with degrees within a year of each other.

He was very sociable and had great friends from a wide sphere of activities and experiences. Many were very close mates he’d known for years – people he’d travelled with, played squash with, or worked with since he was in his twenties.

He and my mum made a great team. They did everything together – socialising, playing golf and travelling the world – right up until about six months before he died. Although he was a retired teacher, my dad still worked up until a few weeks before he died, supervising university exams. He was a bit of a perfectionist so I thought he might have been a tricky boss but I was wrong. His colleagues came along to the funeral and couldn’t wait to share with us what a caring and fair man he was.

Dad and I were really close when I was little. He’d take me and my brother to see the Saints play and afterwards he’d take us into the Club after to see the players. He loved playing in the surf with us and he would spend hours pushing us around on a surf mat. He taught us about the rips and wave direction and how to body surf and catch waves. Some of my favourite memories are of us camping down at Wilson’s Prom and going for hikes and hearing my Dad tell jokes.

After I left university I moved to the UK to work in London, so for a long time my Dad and I had a phone and Skype relationship. I lived there for many years, during which time I met my British partner Tracy, we have now been together over 20 years.

When we had our kids – two boys, now aged 6 and 9, my Mum and Dad started visiting every year. Dad just wanted to do so much to help us out around the house. We had a lot of fun together as a family in those years.

We decided to move our family back to Australia in December 2012 and of course one of the reasons was to be closer to my Mum and Dad. It was so exciting to be just an hour’s flight away, instead of 24 hours.

But less than three months later, in the February, Dad phoned me to tell me he had mesothelioma (asbestosis) and it was terminal.

It came as such a shock and I think for a few weeks my Mum, Dad, brother and I whirled about separately in worlds of consuming bleakness. Facing up to death was terrible. We had no idea how long we had together and it was all made worse by a horrible, painful procedure Dad underwent straight after his diagnosis. We thought it was the end but gradually things got better and when he was able to take on chemotherapy, Dad coped with it with strength, dignity and humour.

The next 18 months or so were amazing. I had such respect for my Dad as he faced his illnesses positively and with so much hope. Being my organised, considerate Dad, he organised his own funeral, even down to the food and venue for the wake. And my Mum still finds little notes explaining how tools work or which appliances batteries are for.

When my Dad was in the last stage of his illness we heard on the news that there was a breakthrough with asbestosis. I can remember feeling so sad we hadn’t had the chance to fix this for Dad and give him back the life that was taken from him, all because he’d worked so hard as a carpenter when he was a young man. But I remember feeling real joy that other families would maybe not have to go through what we were going through.

Cancer research also made my dad’s chemo bearable. We had two years of good times because his doctors were able to get the drugs right and help him manage the side-effects. For my little boys, those two years are the times and memories they shared with their Pop. They are the years I re-connected with Dad after years of distance. In that time both my parents came to term with Dad’s illness in different ways but I think they managed it well and made sure they said the things that needed to be said. I don’t think I had realised how much my mum and Dad loved each other until I watched them go through that.

I know that I am stronger now and more appreciate of health and I make sure to live in the moment.

It’s been a pleasure raising money for the ACRF in my dad’s name. I chose to support cancer research through ACRF because I think this organisation does the most to eliminate cancer, pure and simple. ACRF are a small, efficient machine drilling debilitating holes into a life-shattering scourge. Their funds help passionate, dedicated researchers make discoveries that could save you or a loved one. My appreciation for every person who got behind me for my City to Surf run is deep, heartfelt and inspiring. Thank you.” ACRF supporter, Derrin Stent