A very B-I-G congratulations and thank you to everyone who supported the cancer research City2Surf dream team! 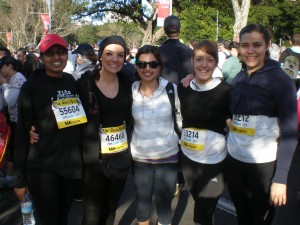 The ACRF dream team – led by staffers Claire, Mahsa and Natasha – is jubilant following a massive effort at last Sunday’s City2Surf which will see an extra $80,000 go directly to cancer research.

The early morning start and chilly weather couldn’t keep them and close to 800 other Australian Cancer Research Foundation entrants from lining up for this annual race from the Sydney business district to Bondi beach.

One of the most inspiring participants in the 80,000 strong field was Fred Pham.

Mr Pham, schoolteacher and father of five young children, has only a short time to live. This did not stop him walking the 14 kilometre course with two of his sons and becoming the event’s most successful individual fundraiser.

“I first had the idea to participate in the City2Surf last year, shortly after being told I have only three months to live, but I had just missed the entry cut-off date,” Mr Pham said.

He’s now raised more than $30,000 for the ACRF. As the winner of a top fundraiser spot Mr Pham has attracted a further $10,000 donation from race organisers, the Sun-Herald. 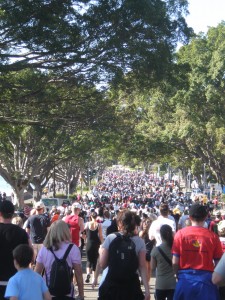 Other Dream Team inspiration came from Susan Francis, Rick Morar and David Jarvis who also ran on the day and raised more than $2000 each for cancer research.

Susan Francis lost her father to cancer just three months ago and wanted to take part in the City2Surf for ACRF to ensure other dads could be saved from this disease.

“My father was a fighter and I am so proud of his fighting spirit right to the end. The run is something I have never done before and I hope my dad will be proud of me,” she said.

Race veteran David Jarvis gave his all on race day, finishing in a very impressive time of less than 68 minutes. Mr Jarvis is encouraging his supporters to continue to donate to the ACRF, even after the event.

Jazz bands and DJs along the 14 kilometre course kept a record 80,000 entrants – some in fancy dress – entertained and helped everyone stay in top spirits, even on the infamous Heartbreak Hill, a tough and seemingly endless, winding stretch of road at the halfway point.

The Dream Team survived Heartbreak Hill but ACRF staffers stopped at the top to catch their breath and take in the glistening harbour views. There they spotted a City2Surf Legend who reportedly was barely breaking a sweat. There are 39 Legends, runners who’ve participated in every race since it started 40 years ago.

PepsiCo, ACRF supporters, invited the team to relax at their beachside Gatorade marquee after the event. 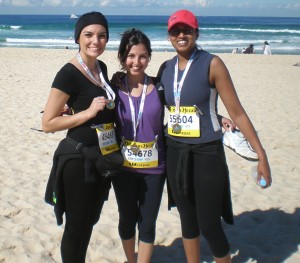 The hundreds of people who’d sponsored the Dream Team accessed live updates throughout the race via Twitter and were kept informed of fundraising efforts on the ACRF’s Facebook page.

Donations came in before, during and now after the event, they happily continue.

So congratulations and thank you to everyone who supported the Cancer Research City2Surf Dream Team.

Check out the video of the team during the race:

Big thanks also goes to all our fabulous 2010 City2Surf Dream Team fundraisers: