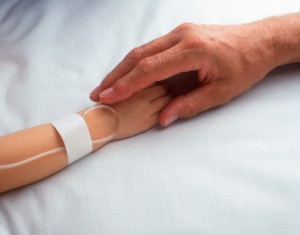 “Tonight, together, we have put childhood cancer on notice.

“Tonight, we have glimpsed a not to distant future where no child who has cancer need suffer,” declared Bob Muscat, chairman of the Children’s Cancer Institute Australia at the August 19 launch of the $3.1m ACRF Drug Discovery Centre.

It houses customised technology that enables one year’s medical research to be done in just a few days.

This drug screening robot is the only one of its kind in Australia devoted to childhood cancer, the disease that kills three Aussie kids on average, each and every week.

Chancellor Gonski described the opening event as a celebration of great research and great donation.

In his welcoming address Mr Muscat acknowledged the ACRF Drug Discovery was made possible by a bequest to the ACRF from the estate of the late Berenice M. McDonnell.

“This generous $3.1m contribution that has been made to our Institute is an extraordinary offering of hope to the 600 Australian children and so many hundreds of thousands more internationally, who this year have been diagnosed with childhood cancer,” Mr Muscat said.

Professor Michelle Haber said of Mrs McDonnell’s bequest, “this gift will have a truly ongoing legacy in terms of improved survival rates for children with cancer.”

“The technology in the ACRF Drug Discovery Centre involves rapid automated screening of thousands of random chemical small molecules to find ones which have the exact structure suitable to block the action of specific genes which we have identified as being responsible for the malignant behaviour of childhood cancer cells,” explained Professor Haber.

“Even better, because the abnormal genes that we are targeting are only present in the cancer cells, we can then attack the cancer cells but leave the normal cells untouched.

“In short this technology provided by ACRF is the pipeline to a generation of newer, safer drugs with fewer side effects,” she said.

Co-founder of the then Children’s Leukaemia and Cancer Foundation, Jack Kassas, recalled the emotional, financial and social upheaval of suddenly having to move his family from the quiet town of Childers in Queensland to Sydney when daughter Helen was diagnosed in leukaemia.

While it was clear that doctors at the Sydney Children’s Hospital were doing all they could for children in their care, it seemed very little was being done anywhere in Australia to conduct research into childhood cancer.

Just 35 years ago the young cancer patients were accommodated in unused army huts, Mr Kassas said. And less than half of these children survived.

Today, thanks to people such as Mr Kassas who raise awareness of, and funds to aid discoveries in medical research, up to 70 per cent of children now survive cancer.

Fifty people attended the opening of the ACRF Drug Discovery Centre at the CCIA.