Cheryl makes a comeback for the ACRF 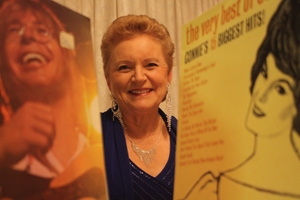 In the 1970s and 1980s, Dayboro singer Cheryl McGinn toured the country as a popular cabaret singer.

She hasn’t returned to the stage for some time, but this month Cheryl has made her comeback to raise money for cancer research!

At a special fundraising concert for the Australian Cancer Research Foundation, Cheryl performed the hits of popular artists John Denver and Connie Frances. She sang in memory of several family members who have sadly passed away from cancer.

“There are so many families and so many people touched by it (cancer),” Cheryl said.

“This year the cabaret is our way of continuing to raise money for the cause, so that hopefully one day others won’t have to leave their families before their time.”

The concert was Cheryl’s fourth public performance since she returned to the stage following the release of her appropriately titled debut album, It’s About Time. Despite a lost voice on the day, the night was a fantastic success!

There was also a raffle on the night and in total over $10,000 was raised for research into all types of cancer – an incredible achievement!  The ACRF is extremely grateful for all the hard work Cheryl put in to organise such a successful cancer fundraising event and we wish her all the best with her sparkling musical future!